Source: Forklifts of the future: Sensors & the Factory | euronews, futuris

At a warehouse in Bilbao, in northern Spain, a strange robotic ballet is underway.

These automated forklifts weigh eight tonnes each. They transport heavy loads of soda.

And they are completely unmanned. 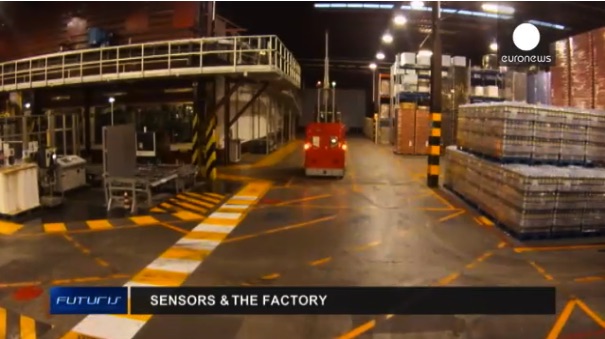 “They work with a laser that measures the different distances inside the walls in the warehouse,” says Vittorio Cavirani, an electronic engineer with Elettric80. “These measurements give the robots their spatial position, so the machines are able to move around different paths in a very accurate way, in a range of millimetres.”

It’s a real challenge to allow different machines to move around autonomously in a given space like this. They have to calculate path and speed, and they have to do it in a safe way. Safety is a fundamental issue here.”

Electronic and sensor engineers developed systems that allow robots to understand their surrounding environment so they can follow determined paths -and avoid collisions.

To achieve this, complex and sophisticated devices were installed in the circuit boards.

Cesare Fantuzzi, an electronic engineer with the University of Modena and Reggio Emilia told Euronews: “The main components are different sensors that watch and monitor if there are persons to be avoided around the robot. Then, there is a navigation sensor. We also have two cameras that see in all directions and inside the machine we have the control system. This manages all the movements the machine does and its different paths. It is connected to the central control system via a WIFI signal.”

A key point, scientists say, was to develop an efficient perception. Laser controlled safety scanners and 3D vision systems allow the automated forklifts to see around them, so they can avoid obstacles, guarantee workers’ safety and better manage different trajectories.

Before coming up with the existing perception system, the scientists faced a number of difficult challenges.

“One challenge we faced is that light conditions in warehouses are difficult. There are many variables. For camera systems this is a real challenge,” explained Kay Fuerstenberg, an electrical engineer with SICK AG/ Pan Robots project coordinator. “But with laser scanners that are independent from light conditions we’re able to support the camera systems and the results in this case are more reliable. And we can work in a very robust way.”

Researchers are now thinking about the market ahead as a way to assist the competitiveness of the European manufacturing sector.

“A development phase will now follow for one or two years, after which products can be introduced to the market,” Fuerstenberg continued.

A market with a huge potential, researchers conclude, as automated devices nowadays count for only one percent of the total current sales of forklifts worldwide.