WASHINGTON, Sep 17, 2015 –Today, the U.S. Department of Agriculture´s National Agricultural Statistics Service (NASS) released the results of the 2014 Organic Survey, which show that 14,093 certified and exempt organic farms in the United States sold a total of $5.5 billion in organic products in 2014, up 72 percent since 2008. 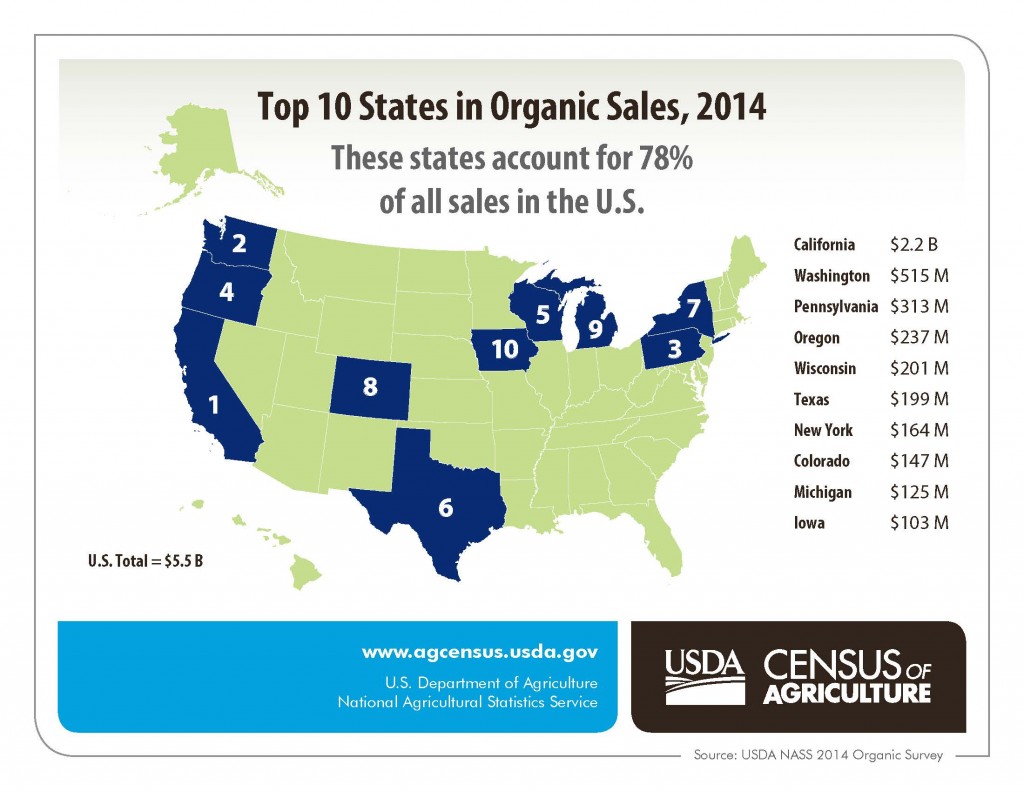 The top 10 states in sales accounted for 78 percent of U.S. organic sales in 2014, with California leading the nation with $2.2 billion. Additionally, the industry shows potential for growth in production as approximately 5,300 organic producers (39 percent) report that they intend to increase organic production in the United States over the next five years. Another 688 farms with no current organic production are in the process of transitioning into organic agriculture production.

“Producers reported in the 2014 Organic Survey that they expect to expand U.S. organic production in the coming years, making the data even more important for policy and programs. These results will assist with the development of appropriate risk management programs designed to help organic producers”, said NASS Administrator Joseph T. Reilly. “The report also shows that organic producers are providing a wide variety of products to customers and are getting those items from farm to table more efficiently”

The selection of organic products sold by U.S. farms in 2014 was diverse, from dairy and proteins, to fruits, vegetables and grains. The top five commodities in organic sales were:

The vast majority of organic agricultural products sold in 2014 were sold close to the farm. According to the report, the first point of sale for 80 percent of all U.S. organic products was less than 500 miles from the farm, compared to 74 percent in 2008. Of the sales of organic products in 2014:

“This report helps show a more complete picture of the U.S. organic industry at the national and state levels”, added Reilly. “The 2014 Organic Survey data will serve as a valuable resource as the agriculture industry continues to look for ways to meet agricultural challenges and consumer needs in the 21st century”

The survey is part of the Census of Agriculture program and was conducted by NASS in conjunction with USDA´s Risk Management Agency (RMA) to provide objective information to serve the organic industry. Survey results are available at www.agcensus.usda.gov/Publications/Organic_Survey/ or the Quick Stats database at http://quickstats.nass.usda.gov.

NASS is the federal statistical agency responsible for producing official data about U.S. agriculture and is committed to providing timely, accurate, and useful statistics in service to U.S. agriculture. We invite you to provide occasional feedback on our products and services. Sign up at http://bit.ly/NASS_Subscriptions and look for NASS Data User Community.