There is a country in Europe where a relevant social movement is arising in search of a responsible and sustainable energy system. This is Germany. It is a bipolar country in this sense: while some lands along its territory obtain almost 100% of energy from renewable sources, this percentage is insignificant in other places. In this second case is Berlin, where almost 99% of energy is produced from fossil fuels, mainly coal. 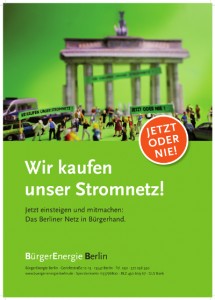 Next year, the city supply of electricity will be re-offered for the next 20 years and the current provider, Vattenfall, has some new serious competitors: the citizens themselves associated in several collectives looking for energy facilities finding an environmental responsibility and a transparent, democratic and participative organization.

“Vattenfall are doing only what the law provides, […] and we think it should go out of its way”, says a co-founder of one of the groups, BürgerEnergie, Arwen Colell, who also highlights the engagement of political agents with the emerging community movement.

In addition to BürgerEnergie, which aims a public-private (51%-49%) partnership to run the grid, Berliner Energietisch achieved, thanks to the support of 265.000 people, to force a referendum on the grid ownership question this November.

These movements are the highest type of a trend that is currently arising in almost one third of German cities, villages or district with the objective of taking over the control of the city´s electricity against big corporations running with different purposes to the interests of people.

So, the next stage will be in further weeks, when the public referendum will be celebrated. Will look forward to it.