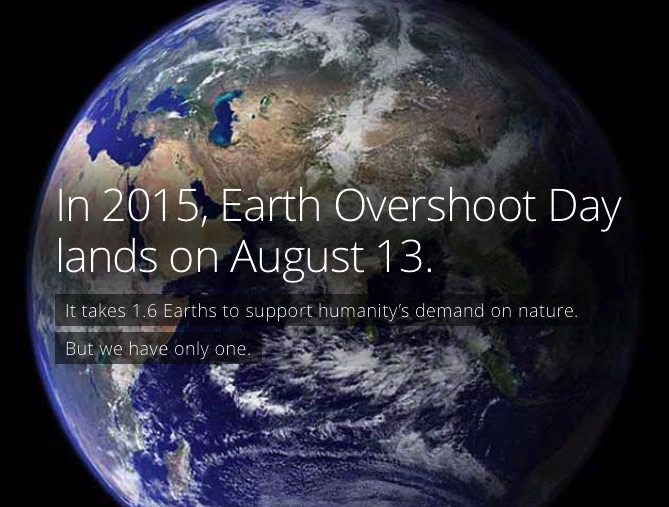 Yesterday, August 13, was the day in which the yearly humanity´s demand of natural resources, as of January 1, exceeds what the Earth can regenerate within the whole year (biocapacity). I.e., yesterday was the 2015´s Earth Overshoot Day.

The Earth Overshoot Day -an initiative by Global Footprint Network– has become a benchmark when assessing the impact of human activity on the environment, and it is calculated applying this formula:

The historical monitoring of this indicator shows that this is the fourth consecutive year in which the Earth Overshoot Day comes earlier compared to the preceding year. In 2015, it came six days earlier than last year (August 19):

The 2015´s record means that 1,6 planets are needed to support the current human consumption of resources; rate that´s has been increasing in the latest years and whose tendency will depend on our present day-to-day decisions as individuals and organizations (right graph)

What´s sure is that if we want to reach a scenario addressed by the green line -which seems to be a smarter scenario- it won´t be by means of the policies, strategies, plans and actions which took the planet to the current status.

This page of the Global Footprint Network shows the ecological footprint per country. Surprising in some cases…