In October 2013 I launched the English version of the blog. The main motives behind the decision were:

Up to that moment, the readers were mostly from Spanish-speaking countries. This is a sample of the reader´s location in a representative month (sept 2013):

Since then (October 2013), I published 83 entries in English -this is the 84th- in an increasing sequence: at the beginning, not all the posts in Spanish had their translation but, little by little, the English version of each post became an inherent stage within the blog management, with the exception of very extraordinary cases.

Regarding the established objectives, I am very satisfied, especially when it comes to my language skills. In practice, it is all about a translation exercise featuring specific language, carried out twice a week. The benefit is self-explaining.

With regards to the readers, the visits by country in a representative month (sept 2014) are these: 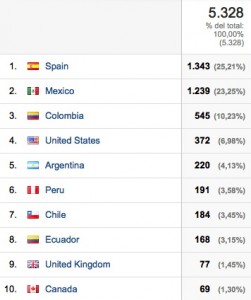 During the last year, the countries per number of readers from non Spanish-speaking countries grew from one to three within the top10 raking, with the additional nuance that USA improved its ranking due to the incorporation of the English readers. Not only that. Up to the #25 position, there are eight more non Spanish-speaking countries per number of readers: India, France, Germany, Brazil, Nederland, Italy, Belgium and Indonesia.

Drawing conclusions from these data is difficult. To position content on the Internet is a long-term task (article in Spanish) and, in this sense, to compare the Spanish and English publications of the blog may not be valid, since the English content exists since more recent time. However, within this uncertainty, there is a clear fact: whether a little or a lot, the English content is getting well regarded, at least for Google, source of more than the 76% of the visits.

As unexpected co-benefits, it emerges the possibility to interact with people from multiple places and cultures which, also in a professional scope, provides a privileged point of view and learning. In addition, an English version increases the possibilities and the quality of the collaborations established with organizations from all around the world.

In a nutshell, the overall sensations I get from the English version are quite similar to the ones provided by the blog: pure fun and learning, with the added value brought by unexpected co-benefits.

An English version of the blog is a worthwhile effort 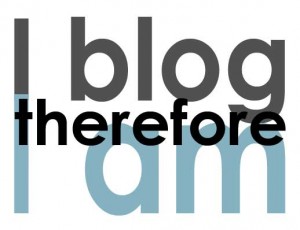