In November 1972, National Geographic released its official magazine nº 142/5. This was the magazine´s cover: 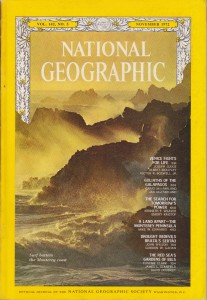 One of the edition´s articles was entitled “The search for tomorrow´s power” and is about the progresses happening, at that time, in the field of energy in order to face the challenges that were already seen as a very likely event.

For its part, the renewable energy sources were a field in the research stage, and the few power plants installed in the world were considered just like prototypes.

Aden B. Meinel was an American scientist well renowned in this field, namely in the thermal solar energy.

Prof. Aden Meinel and his wife, Marjorie, had a project. They envisaged a plant consisting of louver-like solar collectors working as titled lenses concentrating the solar rays into a pipe fill with fluid. This fluid, at high temperature and pressure, should flow to a generator turbine located in a plant in the north-end of the collectors rows.

Furthermore, the land between the long collectors and pipes rows, could be used for grazing cattle or farming.

Aden Mainel and his wife Marjorie, imagined their power plant like this:

In August 2012, a thermal-solar power plant was started up in the town of Calasparra (Spain). This documentary by the plant´s EPC contractor (Novatec Solar), explains well how it works:

As the Calasparra power plant, there are today a huge amount of energy plants all over the world featuring different designs and electricity generation technologies.

Aden and Marjorie died a few years ago -2011 and 2008- but they had time to see how their idea drawn on an illustration more than four decades ago, was coming true in a faithful way as the thermal solar power plants were being erected over the years.

Even, the sheep with which they dreamed of, grazing between the solar collectors of their power plant…. 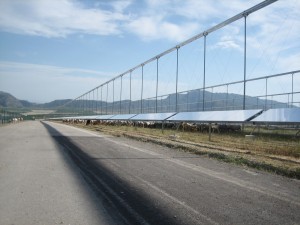 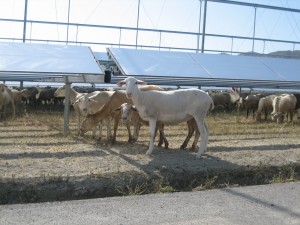 2 thoughts on “Aragon Valley Classic: 1972, when scientists dreamed of sheep in energy plants”