“In the long term, nanotechnology will demand a revolutionary re-thinking of occupational health and safety”. John Howard, MD, NIOSH.

John Howard is the director of the National Institute for Occupational Safety and Health in the U.S..

This words are taken from a document by OSHA on “Nanomaterials and Occupational Safety and Health”. You can go to it in this link: https://www.osha.gov/dte/grant_materials/fy10/sh-21008-10/student_manual.pdf. The quote appears exactly in the module 3 of the document on the assessment of the exposure to nanomaterials in the workplace.

The technical aspects of assessing the exposure to nanomaterials is a complex topic requesting an specific treatment which is no the aim of this post. The point is, when the director of the one of the mayor investor organizations in the world (NIOSH) on OSH says such statement, it is supposed that nanotechnology will indeed bring deep new technical aspects in the OSH field. And that if you are an OSH professional, it is worth you to study the safety and health in nanotechnology.

Nevertheless, I take the words by Mr. Howard beyond the technical OSH aspect of nanotechnology.

Traditionally, new findings along history have followed a path like this:

There are lots of examples with serious safety consequences following this scheme: mercury, lead, asbestos or even celular phones.

Nanotechnology boost started more or less 20 years ago, but it path is being different:

This makes that, taking the United States as example, the investment in environmental, safety and health in the nanotechnology research funding history looks like this (National Nanotechnology Initiative, US): 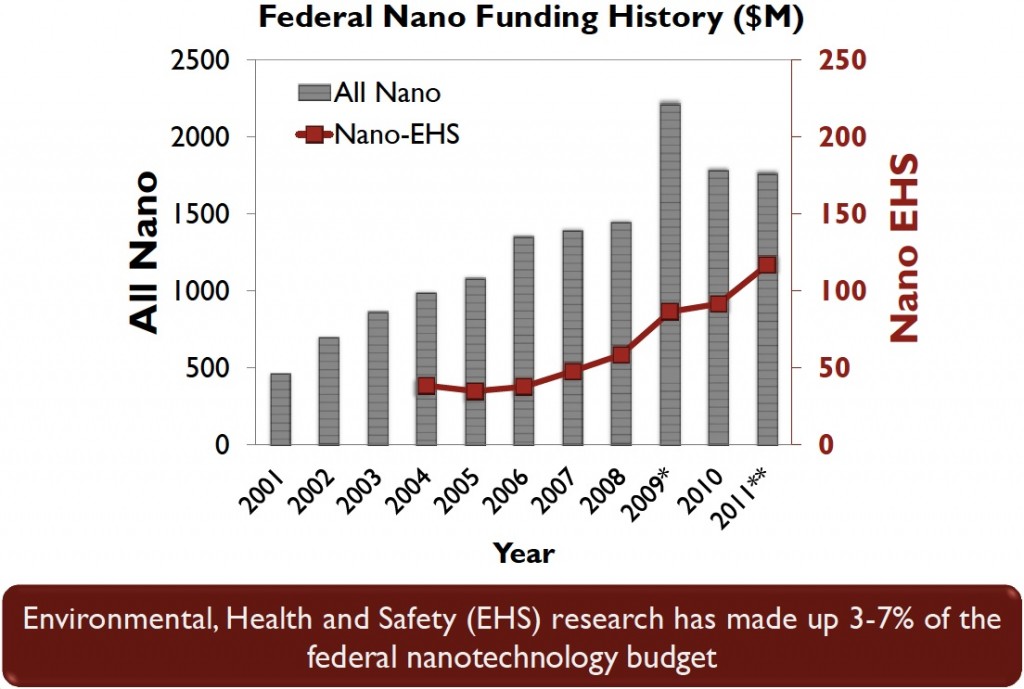 In the latests years, “NanoEHS” research has made up between 3-7% of the total NNI budget.And what is more important, environmental, safety and health aspects arte embedded in the design of the nanoproducts at the very beginning.

Per agencies, EPA and NIOSH take a piece of the cake: 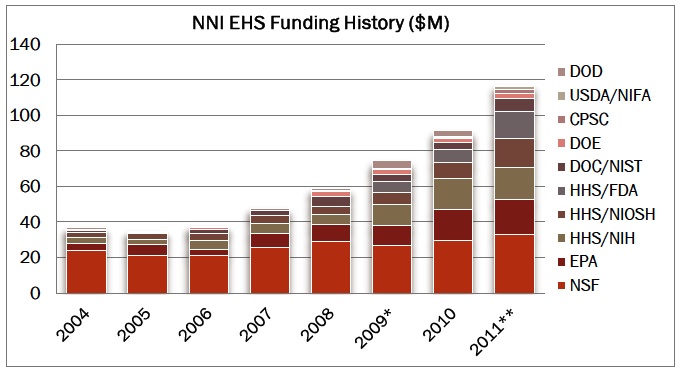 Is an investment of 7% in nanotechnology safety and environment research enough?. Time will tell, but this is indeed a change in the historical treatment of a new finding. It is a qualitative  step forward that improves previous situations and points the way to do thinks.

Some of the undesired effects of nanotechnology are about environment. It is almost sure that nanomaterials’ special physical and chemical properties are leading to unexpected interactions with biological and environmental systems, by means of pollution.

When it comes to the global pollution by nanomaterials, to treat separately environmental of health issues, makes no sense, wherever it affects, workplaces or public health and safety. From the point of view of research, I can´t find such a clear case in which environment, OSH and public health are the same think.

The concept is “NanoEHS“, all together.

Finally, environment and nanotechnology for themselves are becoming key policies in developing and industrialised countries. They are more and more present in the most important statements of the most influencer people of the most powerful countries. Its close connection (nanotech and environment) feeds back its strength, what also empowers as a consequence health and safety. And this is outstanding to spread an safety culture among society. Even more effective than any OSH policy, programs, initiatives, campaigns or strategies launched by any isolated OSH organization.

New technical OSH concepts brought by nanotechnology, embedded OSH in the design of new nanomaterials and the global OSH safety and environmental culture: This overall point of view is what will make nanotechnology a disruptive factor in the future of environment and occupational safety and health.