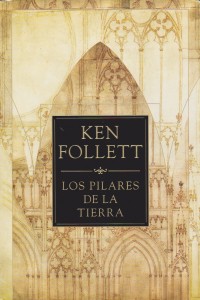 Weeks ago, I finished reading “The pillars of the Earth”, the great book by Ken Follett.

One of the thinks I most liked was how well are the characters defined as the events happen. It almost could be said that, more than a history, what is narrated are the personality of characters in certain situations and the overall sum of these peoples´actions is what creates the beautiful history of the book.

By doing so, it is easy to know the personality of each character and see yourself identified with some of them according to your own personality and principles.

The pillars of the Earth is a book that helps to observe how the time goes by, technology evolves, processes improve and new organizational models appear but that, despite that, there is a thing on Earth that always acts in the same way independently of the age, of existing technologies, emerging systems and organizations established. I am talking about human being.

Choose any character of the book: the courageous-woman Ellen, her outstanding son Jack, the laborious and practical master builder Tom, the brilliant and ambitious Aliena, the great strategist and manager prior Phillip, the powerful and obscure bishop Waleran, the mean-spirit and cruel man of arms William Hamleigh. All these person´s archetypes and similar events existed in any age. Even, of course, in present time. It does´t change: All it, people and events, are the pillars of the Earth.

This is besides a great book to understand that there are no good or bad things, all depends on each one´s point of view. When bishop Waleran and the knight William Hamleigh think that prior Phillip´s prosperity is a dark strategy and that builder Tom´s genius are miserable manoeuvres, is because they really think so. They also think that the most fair ways to preserve the power is by sinking enemies.  It is their ethic scheme. In their opinion, prior Phillip and master builder Tom are dangerous persons and that their way of life is hellish and, for that reason, it is fair to go to any brutal and dark manner to finish with their thriving rivals.

The pillars of Aragon

Days ago, I finished reading another book “History of Central of Aragon´s Railway” (by Carlos Sanz Aguilera). It is a pure research work about a mythical railway connecting (it still does actually) the municipalities of Valencia and Calatayud throughout the province of Teruel.

Apart from the interesting content on railway, a mean of transport meeting the beauty of tradition and excellent features fox sustainable development and territory structure (this issue will likely be matter of a further post), the history of the Central of Aragon is a reincarnation of people´s archetypes and behaviours and a repetition of historic events occurred in Aragon in the lasts centuries and that continue repeating till nowadays.

The state of oblivion and isolation suffered by the province of Teruel two hundred years ago is a copy of the current existing feelings. At late century XIX, Teruel was almost the only region in Spain with no railway (together with Soria and Almería), and saw how communication networks grew around in near regions, but they seemed to avoid the south of Aragon as if it was a black hole.

An emptiness in material aspects which had a direct translation to the feeling of people.

Teruel´s altiplano is a huge cold and almost inhabited land area: “It is only known that it is a vast dessert abandoned to inclemency” (Miscelánea Turolense, Christmas Day of 1892)

Construction of Central of Aragon´s railway was decided without interest by the Spanish Administration in order to reduce the pressure applied by a people tired of the abandonment to which was subject and who claimed that their land, Teruel, also existed.

Once finished, this railway became one of the most profitable among the railways run in Spain in that time. Finally, the typical Aragonish tenacity seemed to was justified, as usual 😉

The case of the Central of Aragon railway is another version of the same history, the history that is repeating in this land for ages. The same that is currently occurring and the same that will continue happening to this land and its people in the future. The pillars of Aragon.

Days ago, I wrote this post about the Central of Aragon railway accident happened in Luco de Jiloca, (Teruel, 1904), based on the same book by Carlos Sanz.

If you have time, read it. You will see the incredible coincidence of the events surrounding the accident with lots of circumstances that are happening nowadays. It is almost a repeat of the same history: Someone powerful person with specific interest pushes in order a train make its route despite of risky weather conditions, an catastrophic accident raising a resounding silence from administration and railway company´s responsible and an avalanche of information without sound data by media, accident inquiries, criticism to the construction project, liabilities depuration, investigation commissions, a relevant report by an engineer releasing any responsibility to the Spanish Administration and the enterprise charges. Weather´s fault.

Ah! several months later, the engineer drawing the report was kindly invited to join the management board of the railway company.

Same histories, same persons and same behaviours.: The pillars of the Earth.