This is a classic entry on the catastrophe suffered in the summer of 1904 by a train from the Ferrocarril Central de Aragón company, while travelling towards Calatayud from Valencia, which was the regular itinerary of this historic railway.

It happened in the boundaries of Luco de Jiloca, province of Teruel. I extracted it from a book I recently read and, indeed, enjoyed so much: “Historia del Ferrocarril Central de Aragón”, by Carlos Sanz Aguilera.

The history of the Central de Aragón railway is in general -and Luco´s accident in particular- an example of how centuries go on, technology evolves, new organisational models are established, but that ages after ages there is a thing that always, always, always is present, adapted to the new times but acting always, always, always in the same way: human being.

This extract from Carlos Sanz´s book on the Luco´s catastrophe, may bring to your mind recent events happened to modern railway systems much more evolved, but however managed by people as it was treated ages ago, as if there wasn´t evolution for them. 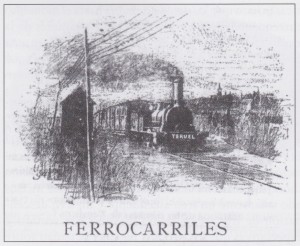 This post is a recognition to the endlessly ignored and unfairly treated Aragonish land, specially Teruel; also, as a tribute to a means of transport finely featuring tradition and history and, at the same time, excellent role for sustainable development and territory organization: railway. Finally, as a claim of the miserable acts of lots of responsible of public administrations in Spain, their corruption and the lack of ethics and professional solvency, from the beginning of time.

Without further ado, here you have the extract. Hopefully you will enjoy this reading.

The most serious railway accident happened during the first years of (teh railway) operation was the one occurred in the surroundings of Luco in the summer of 1904. It happened in the bridge over the Pancrudo river, in the spot named Entrembasaguas, a land close to the Pancrudo´s mouth in the river Jiloca.

The event happened when, due to a huge storm during the evening and night of june the 22th, the river Pancrudo suffered an extraordinary rise by the addition of own water flow and several slopes in the nearby. Water rise reached the railroad track and the strength undermined the slope close to the bridge foundation in the Calatayud side. So, a stretch remained with no support.

The postal train number 6 travelled towards Calatayud consisting on one locomotive and four coaches: one mail coach, two passenger cars and one goods coach. As the track was left without support, the locomotive felt in the undermine and crashed between the roar foundations of the bridge and the top of the slope. 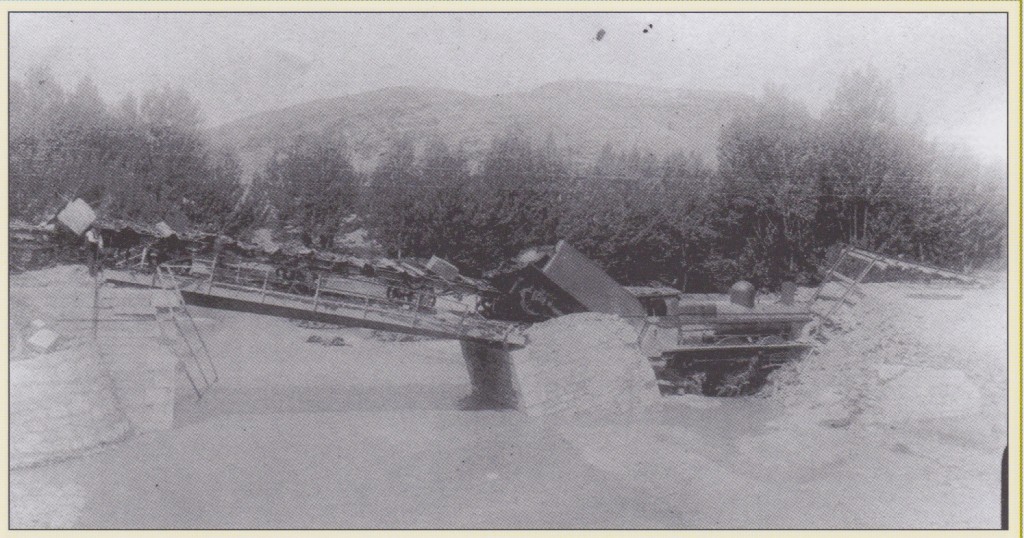 It seems the this action was not sudden but it bended slowly keeping the locomotive horizontally. The locomotive tender felt over the machine and dumped the coal on the locomotive heating, what caused a fire. The postal coach ignited firstly and was dragged by the powerful water stream. The following car crashed to the tender and the locomotive. The rest of cars remained on the track, but suffered damages and finally were cached on fire.

Panic scenes came, due to the lack of light and the rise of water level, so it seems that most of victims died not for the hit, but by falling on the brave water stream, since it is supposed that the train travelled to low speed. Some passengers were rescued when they were hold on branches or steel pieces of the bridge. Among the the sixty one people travelling, five lost their life and there was eighteen injured.

As usual in these cases, during the first hours the information was confusing. As a consequence of the storm, the telegraphic line was missed, what made worse the situation as a quick information on the event was no possible. The warning started when the emergency train left the Teruel station without knowing what happened nor the severity of the catastrophe. The lack of information from the company did not help. Hours later in the daylight it was confirmed that there was victims and material damages, both in the train and the next kilometres of track and the river Jiloca. From the beginning, press sent insiders to cover the news and it got huge local and national dissemination from Zaragoza.

It was very commented if the accident could be avoided. Chronicles say that staff in Calamocha station advised on the risk if allowing the train to continue its itinerary. But the train which travelled some four hours before didn´t report any problem, as the guard also verified by checking the track. It is also commented that some passengers were representative of the company and influencer people who pushed in order to continue the travel. Specifically, it is told that railway inspectors Mr. Lirás and Mr. Drugman, one Guardia Civil captain (Juan Crespo) and the son of a business man from Zaragoza (Mr. Escoriaza) travelled in the train, being injuried. Besides these people, engineer John Shaw, Section Manager also travelled, losing his life in the accident.

Apart from the personal and material loss, the truth is that the accident, for its severity and media dissemination in that age, raised sharp controversy for the possible responsibility of the company in the accident for an incorrect construction of the railway infrastructure. Almost all the media, made hard critics against the railway company, of which was suspected to be only interested in the construction and sale:

“The Central de Aragón railway was built to be sell immediately and that explains the accident”.

Among the public opinion was also spread that the amount of accidents and disasters related to the railway (not only in this case, but also another happened in Spain), remained unpunished since the management boards of the companies were linked to politic power in Madrid:

“Claims not only go to the company: a journal points Mr. Moret, president of the Management Board of the Belgian enterprise and defender from who gets protection and bloodily teases of the exploited country”.

In this sense, Administration was also criticised by allowing the policies of railway enterprises just aiming benefits for its rich business owners, whilst user, poor people mostly, had to reluctantly accept with wretched compensations.

Claims also reached the role Divisiones Ferroviarias, official services of the State, as supervisor and ensurer of the secure construction and railway operation:

“I make known that they (bridges) were not built by Spanish engineers, but they gave their approval”.

In fact, any construction work, relevant or minor, both construction and extension and improvement works carried out by the railway enterprises were approved by the pertinent official División de Ferrocarriles, becoming also responsible of the security guarantee. This caused a public opinion which reached the state court. Because of the gravity of the scandal, local politicians immediately claimed for explanations. Mr. Castel in the congress and Mr. Navarro Reverter in the senate called meetings in order to get more detailed information and clarify responsibilities. They aim to know

“if the company Central is responsible, for neglect, improvisation or bad faith, of the sad railway catastrophe in Luco de Jiloca”.

Thanks to this controversy, we now have available reports making possible to know lot of aspects of the Central de Aragón railway´s operation in the early years during the first decade of XX century. On july 5th 1904, it was issued a Royal Order in order to

“… immediately carry out a detailed inspection to the railway, including any element apart f rom construction and operation activities (levelling, tunnels, masonry works, steel superestruture, stations, apparel and implements, staff, organization of services etcetera); paying special attention to the inquiry of causes causing he accident happened on june the 22th…”

This inquiry was carried out by engineer Federico Rivero O´Neil, who points to the unusual climate conditions during the night as the main cause of the accident, not addressing responsibility neither to the company Central de Aragón or the División de Ferrocarriles in charge of the supervision. It is true that, despite in 1901 there were serious floods in the area, none in the valley of Jiloca river remembered rains as the fallen that night. The storm was outstanding and huge water flows affected to villages far away as Villafranca, Alba, Monreal, Singra, Caminreal and Calamocha. This important water raise caused the lost of harvest in the rivers Pancrudo and Jiloca. But, it must be also pointed that this decision may also contain certain corporate spirit, aiming to exempt from responsibilities to the engineers of the 2nd División de Ferrocarriles and, therefore, the Ministerio de Fomento. Paradoxically, as a consequence of the report, the company is called to develop certain repair works.

Despite that this report solved the issue of responsibilities, both people from Jiloca and the press (who made a wide coverage of the event) pointed to the railway company for the deficiencies in the construction of the line regarding the placement and the low quality of works and materials. In fact, that water stream caused serious damages in the track platform kilometres away from the place of the accident. So, undermines and trenches appeared kilometers away what should cause an accident surely more serious if the train should have continued. The own management of the company started that year in may the procedure to reinforce bridges in the villages of Villanueva and San Martín, after the floods in 1901, works in which, for the own duties of his charge, were involved the same engineers John Shaw -who died in the accident- and Paul Drugman, companion.

Even more suspicious was that the engineer appointed by the Administration to the accident´s enquiry, Federico Rivero O´Neil was invited to became member of the management board of the company Central de Aragón in 1906, and remained there still 1908, what feeds huge suspicious on the corporative spirit of the adimistration. What it seem to be truth is that the company didn´t take action with the promptness and zeal requested in an event like this. This fact is claimed not only by press, which emphasizes on the heroism of some passengers and the model behaviour of the inhabitants of Luco and Calamocha when providing aid to the train, but also the own report underlines:

“There are reasons to think that the company may have fall into responsibility for not have developed the proper zeal and due actions to establish the need means, and for its delay in reporting the events to the administrations…”

The truth is that the report itself showed the deficiencies of a insufficient first operation. In order to restore the railway service, a provisional deviation and a wooden bridge were erected whilst the steel stretch was repaired. The official report also forced to carry out numerous investments during the next years. 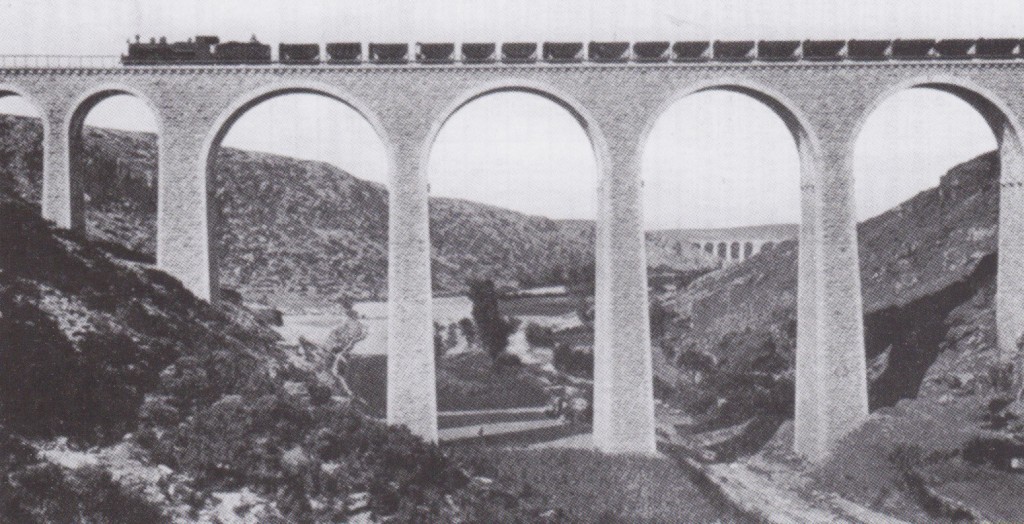