Uralita is a multinational company of building materials. Insulation products, gypsum, pipes and roof tiles are today its main products. The company is present in over 50 countries with a workforce of 2,550 employees [1].

In Spain, the company´s name was traditionally used to refer a whole range of wavy insulation for roofs, be they made by the company or not: “uralitas”. This is a similar case to, for example, Coke to refer to any cola drinks, the Faria cigars, the Juanola, Aspirina tablets,…

However, despite its huge figures and strong presence of the brand even in common discussions, when you now make a search on Google with the word “Uralita”, these are the news that brings the search engine: 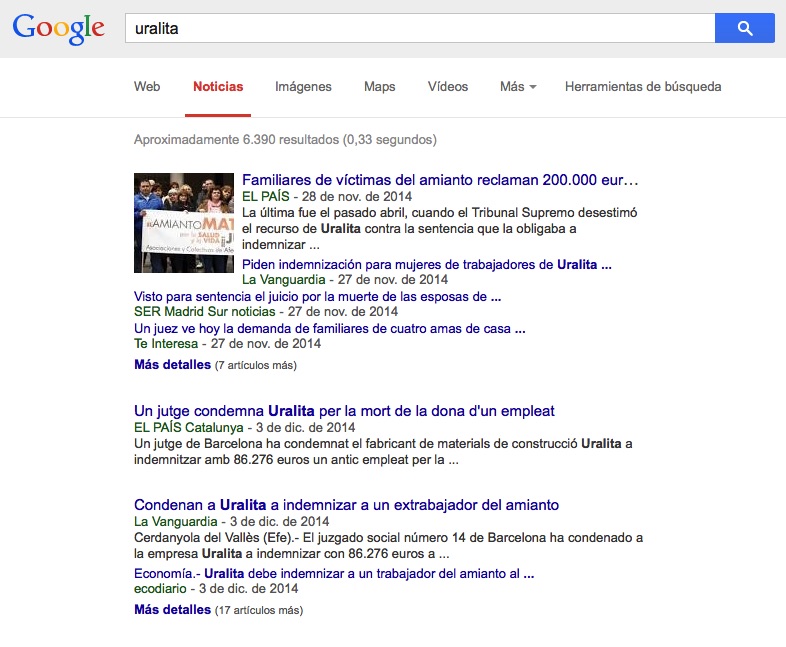 This is the result of a decades-long corporate strategy regarding a problem more complex every day, as the lawsuits in court appear against Uralita for health damages.

I say it is a long term strategy since the company established decades ago the “zero option” (doing nothing) as the main strategic idea, complemented with the whitewash of its main raw material, asbestos.

Weeks ago, I found an evidence showing that for Uralita, asbestos was a secret agent [2] since, at least, the year 1956.

Today, almost six decades later, the zero option and the whitewashing continue being the Uralita´s strategy when it comes to the asbestos´ problem. It can be seen in its own corporate webpage which, when it refers to “communication with society” merely appears a contact form for general and investor´s information. Also, when you see the lack of any responsibility report together to the large economic and financial reports that the company puts at the disposal of just a part of its stakeholders. Nothing about asbestos, as it happened in the “Manual General de Uralita Nº3” of the year 1956.

The manufacture of products made of asbestos is banned in Europe since 2005. So, asbestos is no longer throughout the Uralita´s production chain but, despite that, it is becoming a growing complex problem for the company as new claims and sentences are released for the damages to the health of many people (workers and also non-workers).

Maybe, for the company, the zero option and the whitewash were and valid strategy until a few years ago but, in the age of information and communication technology, it is not the best response.

Any company has a story to tell. In the case of Uralita, it has too much to communicate and, the more the company delays it, the more it becomes a horror story.