Two years ago, on 12 February, Obama delivered the 2013 State Of The Union address. From the place where are given the most influencing statements for the Earth´s future, Obama spoke about household consumption, renewable energy, waste materials, climate change, and even dared to link the climate change with the human activity. It was a real politic challenge to the climate change sceptics.

All these issues took almost the 10% of the lecture.

The conclusions from the 2013 SOTU were promising. “Congratulations America: Finally it seems that science is coming back as a reference point in American politics!”, said the former Climate Action European Commissioner [1]:

Obama applied to go down in history for his environmental policy.

The environmental change of Obama

Two years later, last 20 January, Obama delivered the 2015 State Of The Union address. This time, Obama spoke again about environment and climate change, but less time than in the 2013 SOTU. He started with this topics at about the 43:30 minute with this strong statement:

But he finished talking about it soon -very soon according to the magnitude of his words- in the 46:10 minute. That is, some 2:40 minutes dedicated to environmental aspects, what is less than half of the time spent in 2013.

But, furthermore than the number of words in a speech, emerge some other worrying figures: the Environmental Protection Agency (EPA) had its budget cut by more than $60 million, being the fifth year of cuts for the agency and its staff appointment is already at its lowest levels in 25 years [3]

In addition, the environment figures and tendencies at global level are getting worse and the great decisions on the issue (consumption, circular economy and real decisions on energy) are still pending, bringing into question the Obama´s commitment to lead the global efforts against the climate change [4] 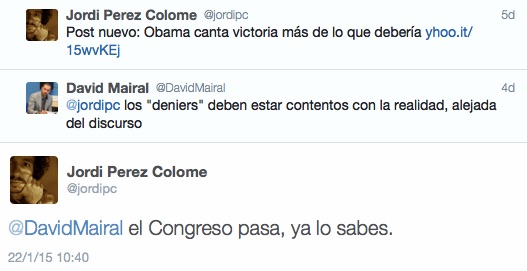 The climate change skeptics can be happy. Today, they are a majority in the Congress, and that may be one of the causes of the environmental degradation of Obama.

Another reasons, are that economic data, employment rates and the forecast for the mid-class took the most of the president´s speech, displacing another topics such as foreign policy or climate change. In the previous addresses, the president could´t boast of his achievements as he did in the last SOTU, rightly or wrongly [5].

This is the last mandate of Obama as president. Maybe, he will go down in history as a good president. But if he does, it won´t be for his environmental policy.