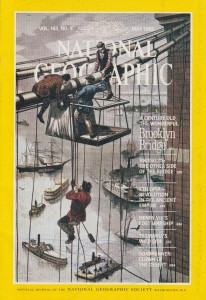 Aragon Valley´s Classics are a series of post on specific events of the past, related to the topics of this blog, seen from the point of view of present times.

It is based on material I collect from several sources, including second hand markets of books or any other rare thinks I get.

This is the first entry of the series is dedicated to the construction of The Brooklyn Bridge, from an information in an october 1983 National Geographic magazine I found in a second hand book´s market in Barcelona.

In 1983, it was celebrated the first century since The Brooklyn Bridge was inaugurated (130 years, today). It was a project with lots of curiosities and Its erection was challenging and full of difficulties.

They didn´t save not even the project managers.

The Roebling family was in charge of the bridge´s construction: John Augustus, engineer, German immigrant, designed the bridge.

His son, Washington A. and Emily, Washington´s wife, were in charge of the project management and works supervision.

As you will note, they were some very committed managers….

It was a long project. One day, during its erection, engineer John A. was doing a supervision tour over the bridge when one foot got trapped between the dock and a ferry. Mutilation of several toes did not avoid the later infection which caused a disability and, finally, John´s death in 1869 for tetanus.

Some time later, his son, Washington got the lead of the project together with his wife Emily. Next year, in 1970, Washington started to suffer paralysis caused by a decompression sickness (also known as diver´s disease, the bends or caisson disease) he contracted in an accident in one of the caissons. He was confined for a decade, beset by a nervous disorder, suffering horribly from the bends, reading and writing with difficulty. But this mind was already alert and supervised every detail of bridge constructions by dictating instructions to his wife. This is how the spent the last years of his, paradoxically, long life (☩1926).

The time Washington was in bed, Emily, also civil engineer, got the leadership of the project following the instructions of his husband. Emily also fought his battles with skeptical experts and dishonest contractors (some things change, not this) in a high complex project. Nevertheless, Emily was a step forward of the events and was “a strong tower to lean upon”.

She was a well recognized professional till her death in the early XX century.

A master piece with serious risks.

The foundations of the bridge´s towers were made by excavating under the riverbed. A huge mine under the sea level that gave a “sense of Dante´s Inferno”. 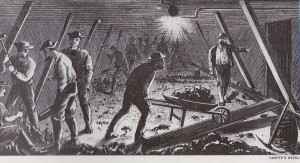 Confined spaces, subaquatic works, in extreme conditions were the cause of lot of worker´s caisson diseases and nervous dissorders. The situation drove to a four day strike and pay was raised from $2,25 to $2,75 a day.

In 1878, while steel wires strength between the anchorages, a completed strand of 278 wires broke, killing two men 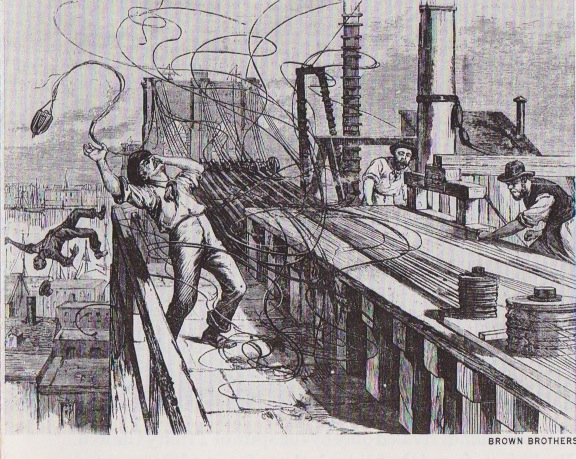 For the steel wires assembly, workers used lifting platforms as the one in the cover of the magazine (up), equipped even with handrails. However, watching the picture, it is easy to suppose that more workers suffered falls from the cables…

An amazing stuff is that, 130 years after Brooklyn Bridge inauguration, it is still possible to see similar situations in some workplaces.

Finally, this is a tribute to the bridge by a 80s classic from Brooklyn: