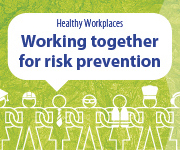 As announced days ago, lasts monday and tuesday I attended the closing event of the European Campaign 2012-2013 “Working together for Risk Prevention”, organised in Bilbao by the European Agency for Safety and Health at Work (EU-OSHA).

The conference was organized as a “summit“, in this way was officially referred and planned, gathering well known professionals of reference on occupational safety and health in Europe, as well as representatives of the European Commission and EU presidency, social representatives from the EU and local and national governments, and also spokespersons from up to 87 european companies and organizations involved in the campaign since its launch last year.

Both, influence and number of involved people make the campaign which ended this week the world´s largest occupational safety and health campaign. Nevertheless, these are not the decisive factors to get such consideration.

Apart from that, it must be considered the differential fact that brings the quality and excellence existing throughout the two-years campaign: the quality of the companies and organizations participating in the awards on good practices and OSH promotion, as well as the excellent organization and the campaign´s development by the Agency from the beginning to the last day of the campaign, prioritizing indeed the quality and excellence when assessing the enterprises and organizations, before quantitative or other superficial reasons.

In a nutshell, as a consequence of both its quality and dimension, this week´s summit completed the largest and best OSH campaign in the world. The next Agency´s campaign (2014-2015, on stress management) will find the bar set high, but there is no more option than overcome it.

From my point of view as a blogger, the collaboration started last year between Aragon Valley and the Agency is also the best of the media partnerships available for a professional of this sector. I will talk about it in a specific post.